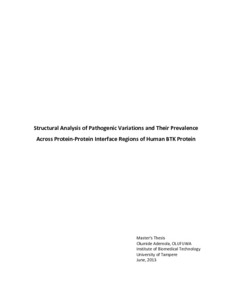 Pathogenic variations leading to XLA are traceable to the defected functional sites of the BTK protein. Thus, grounding our knowledge of the structural interactions occurring at the protein-protein interface regions of the BTK protein would assist in understanding the disease mechanism as well as  determining the targets for therapeutic agents.

Six protein-protein interface predictors (cons-PPISP, PredUS, SPPIDER, Meta-PPISP, PPI-Pred and PIER) were selected to analyze the interfacial regions of PH, SH2 and kinase domains of human BTK protein. In addition, dataset on known pathogenic SNPs in BTK that causes XLA were collected from BTKbase and mapped to regions of the predicted protein interface based on the prevalence of the variations. The results showed that residues V64 (PH); W281, K284, R288 (SH2); G409, T410, Q412, G414, V415, Y617 (TK) are integral constituents of interface regions in their respective domains. Statistical analysis of amino acid abundance across interface region highlighted arginine as the most abundant across the interface regions of PH, SH2 and kinase domain. In addition, arginine also had the highest count of pathogenic SNPs known to cause XLA.