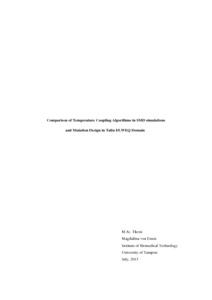 Recently, a significant number of studies regarding the activation mechanism of talin's vinculin binding site (VBS) have been published. Since the hydrophobic VBS is in natural talin buried inside the helix structure, a major conformational change prior to activation is necessary. Talin and vinculin are proteins of the focal adhesion complex which is connecting the extracellular matrix structures to the intracellular cytoskeleton. Based on these facts, it is suspected that the talin activation is force-induced. Current development of computational methods, molecular dynamics (MD) and steered molecular dynamics (SMD), allows single-molecule observations on atomic level. Such possibility widens our understanding of activation mechanisms and force-affected protein dynamics unavailable in classical experimental setting. New methods, however, bring also new challenges. For instance, the assessment of MD/SMD parameter setting and the influence on the observed protein dynamics is one of such challenges. While the parameter setting of classical MD is frequently discussed in the literature, there is no recommendation for SMD setting (thermostat, barostat, ensemble etc.) available.

In this work, two commonly used temperature coupling algorithms, Berendsen and Nosé-Hoover, and their implementation (group coupling) in the simulations were investigated. Furthermore, the influence of force magnitude on the unfolding dynamics was studied. Based on the observed unfolding trajectories, four destabilizing mutations in the talin I/LWEQ domain were proposed.

The results of the herein presented study suggest, that the choice of thermostat has insignificant impact on the unfolding dynamics. However, the implementation of the thermostat (Nosé-Hoover) influences the unfolding. The temperature control should be implemented for all parts of the simulated system, preferably in separate groups coupled to own thermostat. While unfolding with 200pN constant force did not proceed after 4ns of the simulation, gradual unfolding of the protein structure was observed with 300pN, 400pN and 500pN. Furthermore, the unfolding with 500pN exhibited C-terminal oriented unfolding, leaving H2 and VBS completely revealed yet intact between 5 - 6ns. Forces 300pN and 400pN showed comparable protein stretching from both N- and C-terminal end, suggesting fluent force penetration through the structure compared to the higher force.

Based on the results of ionic, hydrogen and hydrophobic interaction analysis of 200pN and 300pN unfolding trajectories, four bonds were identified as resisting the forced unfolding. Residues participating in these bonds were designed mutations with structure destabilizing prospect; I2316S, E2317A, D2386A and R2398A.