The Cartographic Reasoning in the Arctic. Modern Territorial Representations of the State in the Arctic Strategies of Norway, Russia and Finland. 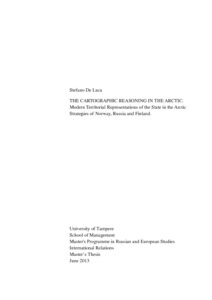 In the late 2000s, the renewed interest of the Arctic States over the Arctic has been seen with international concern as a revival of hard-core geopolitics towards an area that became an example of cooperation among states and minorities. This apprehension is based on a simplistic conception of territory as the natural material manifestation of the State over the Earth, typical of classical geopolitics and the realist school of International Relations (IR). The scope of this thesis is thus twofold. Firstly, it aims at problematizing the often academically neglected concept of territory. It is only adopting Wendt’s social constructivist approach and the notion of the state “as-a-person”, which rationalizes its personhood and agency on the international scene, that I assume it is possible to understand the contemporary situation of the Arctic, where the Arctic States are intentionally acting as the legitimate actors, within the socio-cultural framework of the current International Legal System. Moreover, with the analysis of the sources of international law and how they manage and resolve territorial disputes, it will be argued Carl Schmitt’s previous conceptions of territorial sovereignty and geographical Order, described in the Nomos of the Earth, which is also at the roots of IR realism. My point is that, following Stuart Elden’s insight, territory is indeed a political technological tool, whose technological aspects are represented by cartography which influences subtly the way we relates to the World and eventually even the patterns of the modern nation-state through what Franco Farinelli calls the cartographic reasoning. Such logic is best expressed by the three characteristics of continuity, homogeneity and isotropy, that ‘stemming from the map’ are the attribute themselves of the modern state. The categorization of these three features through the methodological means of Norman Fairclough’s Critical Discourse Analysis will provide an initial analytical framework for the Arctic Strategy documents of Norway, Russia and Finland. Considering them as the performative territorial representation of the state, it will be possible to prove whether the Arctic States are actually turning back to hard national interest-based policies, or some post-modern spatial aspect is predominating. The findings are promising on the analytical side, showing the appropriate flexibility for texts and maps, and illustrate that the Arctic States are ‘still on the Map’, managing to adapt global phenomena in the terms of cartographic reasoning, reaffirming thus their leading role in the determination of political space.