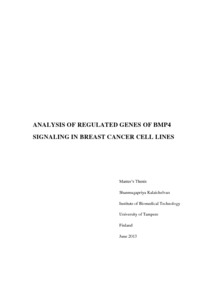 Background and aim: The role of bone morphogenetic proteins (BMP) 4 and 7 in primary breast cancer is peculiar as they are known to induce cell proliferation in some tumor cells and also to reduce tumor growth in some cells. They are studied for their signaling on gene transcription. Characterizing the transcriptional response of primary breast cancer cells to BMP4 and BMP7 would serve better in understanding the role of these proteins in cancer biology. This work is aimed at finding out the genes that respond to these ligands. The data taken for analysis is an Agilent RNA microarray data. The data is produced from RNA of seven breast cancer cell lines that were treated with BMP4 and BMP7 ligands. Each cell line had shown different expression to these ligands and hence finding the genes that are most significant in their expression when treated with these ligands and also exploring the Gene Ontology, Transcription Factor and KEGG pathways of these genes would provide more information. These studies were performed also for the set of genes obtained from hierarchical clustering known as group C genes.

Methods: The Agilent microarray data was analyzed using Bioconductor’s limma package in R programming environment. The cell lines that were treated with both BMP4 and BMP7 and that were treated only with BMP4 were analyzed separately. The significant genes were found out based on P-value and heat maps were generated using the log FC (Fold Change) values revealing their expression upon BMP4, BMP7 treatments. Furthermore, using WebGestalt the Gene Ontology, Transcription Factor and KEGG pathways were also analyzed. The group C genes were also subjected to these analyses using WebGestalt.

Conclusion: The aim of the thesis work was to identify the set of genes regulated by BMP4 and BMP7 signaling and it was obtained. It can be said that the BMP4 and BMP7 had a strong effect on the genes by varying their expression from each cell line to the other. The work had established basic information on signaling effects of BMP4, 7. It had also found out the biological and molecular functions, transcription factors and KEGG pathways involving these genes.