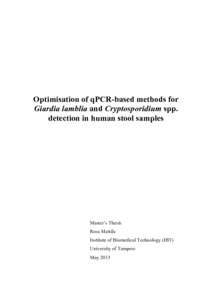 Background and aims: Millions of people die every year of intestinal parasite diseases. Two epidemiologically important parasites, Giardia lamblia and Cryptosporidium species (spp.) cause e.g. diarrhoea, vomiting and at worst malabsorption. Detection of these parasites has thus far been done by e.g. microscopy, but quantitative polymerase chain reaction (qPCR) would be a more accurate, sensitive and less time-consuming method and more samples could be tested at a time. The aim of this thesis was to optimise methods and to develop a protocol for simultaneous detection of human intestinal parasites Giardia lamblia and Cryptosporidium spp. (C. parvum and C. hominis) from clinical stool samples in a high-throughput format.

Methods: Human stool samples positive for Giardia lamblia or Cryptosporidium hominis were used to test different sample pretreatments (concentration methods, heat shocks, freeze-thaw cycles and proteinase treatments) and combinations to find the optimal one for maximal DNA release from the parasite (oo)cysts. Altogether 13 different protocols were tested. Three commercial DNA extraction kits were tested to find the best one for parasite DNA extraction. qPCR reaction was optimised first for primer and probe concentrations separately for both of the parasites and secondly these were combined into a multiplex reaction. DiabImmune study samples were tested for the two parasites after optimisation of methods and the functionality of qPCR reaction was confirmed for Cryptosporidium parvum too.

Results: A pretreatment protocol consisting of a 10-minute heat shock at +98 °C and an overnight proteinase treatment at +56 °C was considered the best. The choice was made mostly based on the results of the Giardia lamblia sample, because the Cryptosporidium hominis sample showed constantly weak positivity. An extraction kit designed for viral RNA extraction was found the most effective. The differences in results obtained for different qPCR primer and probe concentrations were small and the concentrations were thus chosen cost-efficiently based on the lowest possible concentrations of the reagents. The Cryptosporidium spp. qPCR was found to detect both Cryptosporidium hominis and parvum. All DiabImmune samples collected from children representing background population were negative.