The institutional and political economy of Maastricht criteria 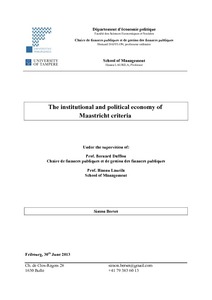 Fourteen years after its “technical” start on 1st January 1999 and eleven years after the entrance into force of the “full” monetary union with the physical introduction of euro coins and banknotes on 1st January 2002, the European Economic and Monetary Union (EMU) is facing the most severe crisis of its existence. Particularly affected, the public finance stance of some member states has become quite alarming, so that, it might jeopardize the whole monetary area. In that tense context, and in parallel to the several austerity programmes undertaken by, and/or imposed on, many governments, there have been serious calls for reforming the European Union’s (EU) restrictions framing the national fiscal policies. The doubts regarding the effectiveness of these supranational fiscal rules are however not new. Since they have been initially designed, the so-called Maastricht fiscal criteria have been indeed subject to a wide range of criticisms. Setting out from this premise, the present Master’s Thesis investigates the construction, as well as the functioning, of the EU instrument of fiscal discipline from a political and institutional perspective. Based on an economic theoretical framework, our research, after having specified the economic concept of “fiscal discipline”, provides a dynamic institutional reading of the EU legislative acts forming the fiscal constraint in force nowadays. More than just describing the provisions prescribed in these legal bases, our study carries a deeper analysis, which highlights the improvement made over the last twenty years, as well as the remaining shortcomings and inconsistencies contained within the European fiscal environment.