The Sami in Finland - On EU law, land rights and the preservation of Sami culture 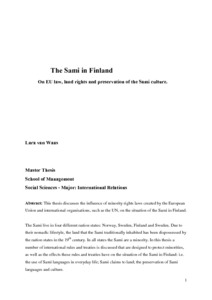 This thesis discusses the influence of minority rights laws created by the European Union and international organisations, such as the UN, on the situation of the Sami in Finland.

The Sami live in four different nation states: Norway, Sweden, Finland and Sweden. Due to their nomadic lifestyle, the land that the Sami traditionally inhabited has been dispossessed by the nation states in the 19thcentury. In all states the Sami are a minority. In this thesis a number of international rules and treaties is discussed that are designed to protect minorities, as well as the effects these rules and treaties have on the situation of the Sami in Finland: i.e. the use of Sami languages in everyday life; Sami claims to land; the preservation of Sami languages and culture.Keywords: Sami, Finland, minority rights, land rights, cultural preservation, European Union, territoriality