Cloning of UBAP2 and its role in prostate cancer 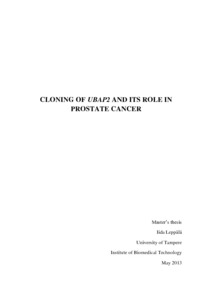 Background and aims: Prostate cancer is a common malignancy affecting millions of men worldwide. The molecular mechanisms involved in prostate cancer are poorly understood. Genomic copy-number alterations are common in prostate cancer and one recurrently amplified region is 9p13.3. This recently identified amplification has been found to be associated with higher PSA-level and poor progression-free survival in prostatectomy treated patients, which indicates that the region harbors one or more novel oncogenes. UBAP2 is one potential target gene of 9p13.3 gain. The aim of this study was to clone UBAP2 gene and to investigate whether its overexpression would affect the proliferation of prostate cancer cells.

Methods: UBAP2 gene was cloned with TOPO-TA cloning to pCMV-Sport6 expression vectors. PC-3 and LNCaP prostate cancer cells were transiently transfected with different UBAP2 variants and their proliferation was assessed by AlamarBlue assay and by microscopy and digital image analysis. UBAP2 mRNA overexpression was verified by using RT-qPCR analysis. Overexpression at the protein level was verified by using immunocytochemistry.

Results: In this study, the cDNA for full-length UBAP2 gene was successfully cloned. In addition, we identified multiple novel splice variants of UBAP2. According to RT-qPCR results, prostate cancer cells transfected with UBAP2 expressed its mRNA at high levels. At the protein level, a subset of the transfected cells expressed UBAP2 at a high level, while the others expressed it at a very low level only. Overexpression of the full-length UBAP2 slightly increased the proliferation of PC-3 and LNCaP cells, but the differences were statistically insignificant.

Conclusion: There are many distinctive features associated with transcription and splicing of UBAP2. Although the results of this study suggest that UBAP2 overexpression has no statistically significant effects on the proliferation of prostate cancer cells, we cannot rule out the possibility that UBAP2 is the target gene of 9p13.3 amplification. Further investigations have to be carried out to determine the function of UBAP2 and to clarify the role of its increased expression to prostate cancer.