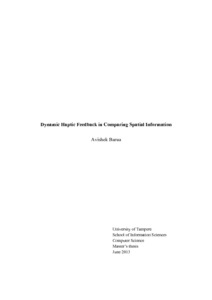 Simple haptic feedback has been used in mobile phones and other hand-held devices. In addition to auditory and visual feedback, haptic feedback would enhance the possibility of multi-modality and cross-modality.In this study, a concept of dynamic haptic feedback is presented and predetermined spatial data was used to conduct an experiment. The goal of the experiment was to find out the most effective haptic feedback method on the palm where the experimented methods were pattern-based and frequency-based haptic feedback. The results showed that pattern-based response accuracy rate was 93% while frequency-based response accuracy rate was 78%. Recognition rates of different frequencies were substantially different while recognition rates of different patterns were closely similar. The result of the study can be further used in development of a new hand-held device which could display more accurate and precise haptic data, and would make haptic feedback through a hand-held mobile device more realistic.