Negotiated meanings of fashion-forward television programmes : A case study on Sex and the City and Gossip Girl 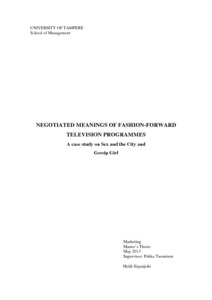 The theoretical framework of this study is based on Consumer Culture Theory. However, as the theory actually refers to multiple theoretical perspectives on the relations between consumers, marketplace and cultural meanings, this study concentrates in the cultural meanings in the mass media culture of consumption and the interpretation of self, others, television media and fashion in this context. Consumers are seen as unpredictable and interactive individuals, who are cleverly negotiating meanings in the contemporary culture of consumption.

The empirical data in this study was collected by focus group interviews. Focus group interview means that a group of selected people are gathered together to discuss a certain topic in order to gain in-depth information on the feelings and thoughts of the group. There were two focus group interviews in this study with 3 and 6 participants. All of the participants were Finnish females aged between 22 and 28 years. They all belong to the target audience of the television programmes studied and have been following one or both of the series regularly. Secondary online data was used to complete the empirical data.