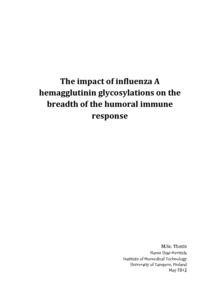 Influenza A is a highly contagious respiratory virus whose surface protein hemagglutinin (HA) constantly obtains mutations at its five antigenic sites. These mutations occasionally lead to acquisition of new N-linked glycosylation sites that may alter the antigenicity and virulence of influenza virus by shielding the major antigenic epitopes. Glycosylation sites 71, 142, 144, 172, 177 and 179 have occurred in the HA globular head of the natural seasonal H1N1 influenza A strains and become fixed over time. The immunomodulatory role of these single and multiple additional N-linked glycosylation sites in the recombinant pandemic A/Netherlands/602/09 H1N1 (rWT) background was assessed. Hemagglutination inhibition (HI) assays were performed with mouse and ferret antisera to evaluate the effect of these additional glycosylations on the breadth of humoral immune response. Poor HI activity was observed with antisera from mice infected with the rWT and the recombinant virus glycosylated at site 144 against 14 natural seasonal H1N1 isolates that occupy variable glycosylations and are antigenically distant from the pandemic strain. It was shown that mouse antisera elicited by viruses containing an additional glycosylation at site 144 or 144-172 were capable of cross-reacting with the rWT and a panel of recombinant mutant viruses with single or multiple additional glycosylations. Conversely, antiserum from mice infected with the rWT had a considerable loss in cross-reactivity against the viruses glycosylated at sites 144 or 144-172. However, antisera from ferrets infected with the 144-glycosylated or 144-172-glycosylated viruses showed narrowed cross-reactivity against a panel of glycosylation mutant viruses and were not capable of neutralising the rWT, as measured by microneutralisation assays. Based on the observations with mouse antisera, most of the polyclonal activity seems to be directed against the antigenic site Sa, efficiently masked by glycosylation at site 144. This alters the antigenicity of the 2009 pandemic H1N1 virus by redirecting the focus of polyclonal response to multiple sites around the site Sa. The broad cross-reactivity was shown to be unique to site 144, since the breadth of polyclonal response elicited by other mutant viruses with single or multiple glycosylation sites was narrowed below homologous titres, having no activity against the viruses containing the site 144. Broadening the humoral immune response by incorporation of additional glycosylation sites provides an approach for universal, broadly reactive influenza vaccines. However, further validation is warranted in both animal models.