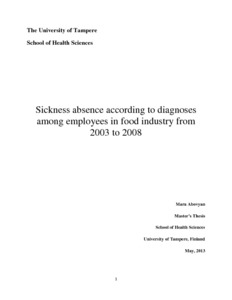 Background:Previous studies have indicated locality differences of sickness absence in the context of health and social conditions of inhabitants.

Aim:To examine the number of days of sickness absence among blue- and white-collar workers according to the diagnoses in four factories of a food industry in Finland during a 6-year period (2003-2008).

Methods:The study was carried out at the main four food factories of a large food industry   in Finland.  The data was collected in a 6-year period from 1 January 2003 to 31 December 2008 from the personnel register of the company. The data included age, gender, occupational status, target units, sickness absence of all members of staff due to diagnoses, and person years of work.  The study participants were represented by blue (88.3%). and white collar workers (11.7%). The age structure of the study was from 17 to 69, the mean age by 2006 was 36.8 with range equal to 13.1. Descriptive analyses were done by using frequency tables. The number of sickness absence days per person years among blue and white collar workers was calculated separately for each factory due to diagnoses. Differences in sickness absence for each diagnosis in different factories among blue and collar workers were evaluated with rate ratio and 95% CI from general linear models, presuming negative binominal distribution for the days.

Results:There were significant differences in number of sick leave days due to diagnoses in the studied target units. The highest rate of sickness absence days according to diagnoses was among blue (127.3) and white (53.5) collar workers at one of the factories. Also, the highest incidence rate of diseases was noted in blue (RR=2.16, 95%CI 1.04-4.50) and white (RR=2.73, 95%CI1.86-4.00) collar workers of the same factory. Musculoskeletal diseases were the most common reason for sick leave, followed by injury or accident for blue and flu for white collar workers.

Conclusion:The study showed that there are differences in number of sick absence days due to diagnoses between four food factories belonging to the same company.