Za sestnye vybory - For Fair Elections. Frame Analysis of the Pro-Fair Elections Rallies in the Russian Press after the 2011 Duma Elections. 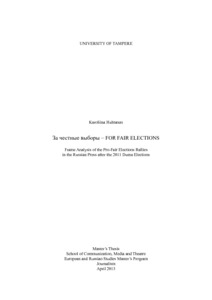 This Master’s Thesis studies the press coverage of the demonstrations that took place in Russia after the Duma elections in December 2011. The parliamentary elections were thought to be a formal test of legitimacy for the leading party, United Russia. However, United Russia suffered a bitter defeat and gained only a bit less than 50 percent of the votes. Despite the obvious defeat, the claims of rigged elections spread quickly, and people begun demonstrating against the results. A protest movement demanding for fair elections spread all around Russia.

The goal of this thesis is to analyze how two Russian newspapers covered the rallies. The empirical data consists of articles from two newspapers, Kommersant – an independent newspaper – and Komsomolskaya Pravda – typically portrayed as a newspaper faithful to the officials. The method for the content analysis is Frame analysis. In a relatively controlled, neo-authoritarian media system the Russian media outlets had to balance between the ideals of objective journalism and the pressures coming from the Russian authorities. This thesis seeks to make visible what kind of coverage the print media produced and how the demonstrations were framed in the newspapers.

My study shows that the newspapers provided various perspectives to the rallies. During the analysis period of one week, framing of the rallies changed dramatically. In the beginning, the rallies were framed as a typical behavior of belligerent opposition and as a threat to Russia. The split between the power and the people was emphasized. Towards the end of the week the framing became softer and more humane, and the rallies were framed as harmless folk festivals and as a celebration of a robust civil society.

On the surface, the coverage seemed to provide multiple ankles. However, especially Komsolmoskaya Pravda framed the rallies in a way that was favorable to the authorities, emphasizing the aspects of threat and the need for stability. Furthermore, the shift in Komsomolskaya Pravda’s framing was parallel to the shift in the official rhetoric: when the officials acknowledged the need for dialogue with the protestors, also Komsomolskaya Pravda softened its approach towards the rallies. Kommersant’s coverage showed some signs of following the official rhetoric towards the end of week, but compared to Komsomolskaya Pravda, Kommersant provided a more balanced and pluralist coverage, emphasizing both the uniting nature of the rallies among the protestors and the fundamental split that exists between the power and the people. In addition, Kommersant discussed the potential of a political change in Russia and the issue of press freedom.