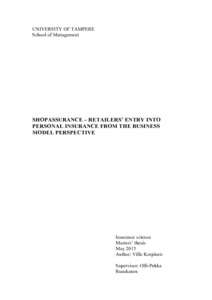 Insurers have been looking at new distribution channels for several decades. Bancassurance gained traction as insurers and banks sought to capitalize on the seemingly large cross-selling possibilities. In Britain retailers have emerged as new partners with which financial services providers started partnering up to offer banking services and insurance. However retailers soon started looking for a more active role in the financial services business because of the profitable new business areas and the chance to increase customer loyalty. Retailers started moving beyond strategic alliances and set up joint ventures with insurers that were later on wholly acquired by the retailers. The offering of insurance services, shopassurance, was seen as the final phase in this evolution of retailer financial services offering.

Through this study it becomes evident that when shopassurance is looked at form the business model perspective it is not just a question of distribution but rather it represents a larger change in how shopassurers can create, distribute and capture value. As the level of retailer influence in the business models increase the divergence from traditional insurance business models grows driven by the customer centric approach that is common practice in the retail business. From a Finnish perspective shopassurance is still fairly undeveloped but according to the experts interviewed it represents interesting future possibilities especially if developed with a focus on on-line service possibilities.