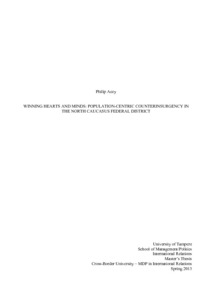 In International Relations, war and security comprise a large role because it generally affects multiple countries. The insurgency in the North Caucasus Federal District is not only a threat to stability in the region or the Russian Federation, but to international peace and security as a whole. The Caucasus Emirate terrorist organization has declared jihad against the Russian government and any country or individual which they consider wages war against “Muslims”.

Population-centric counterinsurgency is a strategy implemented by a government to win the “hearts and minds”, meaning the support of the target population to create an environment of support for the counterinsurgent, whereby support for an insurgency decreases and long-term stability is achieved through nation-building, encompassing the strengthening and maintenance of all forms of national power: the political, informational, military, and economic elements. In this thesis it is framed into three Logical Lines of Operation (LLOs): governance, economic development/essential services, and combat/civil security operations based upon the United States Army Counterinsurgency Field Manual No. 3-24. I also address the Russian government’s information campaign to enable stability since psychological warfare comprises a large part of population-centric counterinsurgency.

One can conclude from this thesis that the Russian government, although still suffering to reform, is making considerable effort to solve the instability in the North Caucasus Federal District through economic development and a country-wide information campaign while still largely failing to gain the trust of the regional population due to gross levels of corruption, a closed political process for the people to decide their future, and continual abuses by military and security personnel who are still determined to solve the instability through violence. I have concluded that the Russian government implements a population-centric counterinsurgency strategy in terms of its information campaign and economic development, fails in terms of governance and drastically fails in combat/civil security operations.