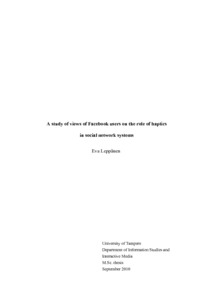 The research area relates to mediated interaction and people’s activities in social network systems of the Internet. There are various systems available in the Internet for mediated social interaction. The context of this research is limited to voluntary and free-time based social interaction and maintenance of personal relationships. The purpose is to clarify the role of haptics (the sense of touch) as a part of activities of social network systems.

Since the question is about social interaction occurring at free-time and concerning mundane matters, it makes sense to think about means for enriching the interaction with more affective, playful, supportive, and interactive ways, although people are already able to adapt and use the prevalent text-based interaction in various ways. Also, increasing mobile use of social network systems creates new contexts and challenges to be faced for making mobile use fluent. In addition, mediated interaction creates new affordances for communicating and being in contact with others. Because of changing behavior and new interaction contexts, there might be needs for additional and alternative means of interaction. Mediated haptics might be a viable alternative since the sense of touch is an important part of physical interpersonal interaction and has a role in making interaction more affective and personal.

The subject is future oriented. The results of the user study are based on knowledge of contemporary technology and usage of social network systems, which presumably will develop in parallel with development of haptic solutions. Consequently, this research serves as an initial overview on the subject at this moment of time when Facebook use has achieved mass use, and only a few haptic solutions are commercially obtainable.

The research concentrates on Facebook and similar social network systems. A user study was conducted in order to clarify views of users on usage of haptics. A semi-open questionnaire was selected as the method. As a part of the questionnaire, three different scenarios involving haptics were provided to the participants for evaluation.

Based on the results obtained, it could be concluded that Facebook is not used in such a way that would benefit much from haptics. At least, users are not yet ready for bigger changes and are relatively satisfied with the current usage. However, the user study together with theoretical analyses revealed potential usages of haptics in the future and matters to be considered in designing haptic solutions. In addition, different development paths are proposed for inclusion of haptics: one as an enhancement to messaging and another associated with interaction in 3D environments and gaming.