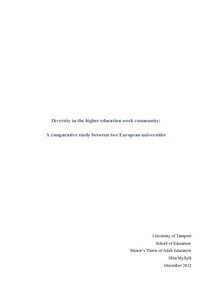 This study compares the perceived diversity climate in two universities; the University of Tampere and the University of Zurich. Main emphasis is on gender, age and race & ethnicity as they are some of the most readily detectable and common diversifying characteristics on almost any workplace. Yet, discussion over the equality of these groups, and many others, has not ceased or lost its relevance. The study will also explore the connections between diversity climate, inclusiveness and commitment.

The data was collected with an e-questionnaire that includes some open questions. Three language options were made available (Finnish, German and English) and finally analyzed quantitatively with IBM SPSS Statistics 19. The questionnaire targets the main themes of the study and asks specifically about gender, age, cultural equality, general diversity equality, work equality, inclusiveness as well as commitment. It was sent to 1048 people in Tampere, of which 175 answered and 3769 people in Zurich, of which 215 responded. The faculties/schools match to the degree possible in an international comparison.

The study reveals that the two universities do differ in some of the equality aspects though mostly they are similar. The University of Zurich differed statistically significantly from the University of Tampere in cultural and work related equality; the University of Zurich perceived equality in these two cases higher than the University of Tampere. In further investigation, it was discovered that this was due to some of the schools in Tampere receiving a low score compared to some others. In other equality aspects, the universities did not differ in great detail from each other though different emphasizes could be discerned. The link between inclusiveness and diversity equality was also found to be strong. Whereas, diversity equality did not have a great effect on affective commitment, still it was statistically significant.

The issue of diversity and related equality is relevant in the European context as we experience vast demographic changes and ever-expanding mobility. This study gives an overview of the issues prevalent in two national contexts and shows possible areas for improvement through comparison.