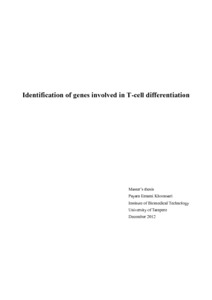 Methods: Central T-cell Network (the main gene regulatory network in T-cells) is used to start the simulation with customized random Boolean networks. Because of large scale of the network an initiative approach was used to reduce the number of possible states which were needed to be explored. Graph theory was used to find the attractors. GO analysis was used to find information in attractors. Clustering methods were applied on attractors in order to find groups of interesting gene states. Finally, data mining and microarray data analysis were utilized to verify the simulation system.

Results: Forty experiments resulted in 833 attractors (with period 2 or 4). GO analysis (performed on most frequent attractors) resulted in no significance in T-cell differentiation processes. Clustering methods classified each type of attractors to exactly two different clusters. The simulated gene expression divided the genes into 3 groups, and GO analysis did not show significance in any differentiation process. The result of gene expression ratio of CD4+ and CD8+ cells showed a significant difference between the microarray data experiments and simulated gene expression ratios. Finally, the result of data mining suggested that CD4+ cells were located in one of the clustered attractors.

Conclusion: A new environment was developed to simulate the dynamics of the gene regulatory network in T-cells. A novel approach was used to reduce the state space and in finding attractors. The resulting attractors were analyzed by several experiments. Although the genes involved in differentiation processes were distributed sporadically on the attractor clusters, CD4+ related genes were clustered in one group. This indicates the usability of the system for distinguishing different cell types. The result also indicates that the system can be used not only for T-cells but also for any biological network. A conclusion can be drawn that this new system is applicable for different networks but more experiments with different parameters are needed to verify the simulation system.