Future Perspectives in Crisis. Spanish University Graduates? Perceptions of Structural Violence in the Context of the Economic Crisis 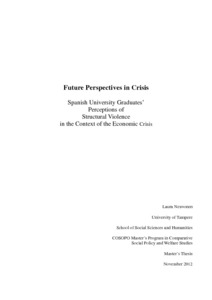 The economic crisis has hit the whole globe hard and Spain is no exception. The current unemployment rate of 25, 8% is alarming high and it has broken earlier unemployment records. The situation of youth is the worst, as youth unemployment has already reached over 50%. The crisis has eroded prospects of young people entering the labour market. The chances of Spanish university graduates might be better compared to those with no studies at all. However, their labour situation was not overwhelmingly good before the recession. In Spain, university graduates have, for the last twenty years, contended with precarious, temporary jobs for which they were over qualified.

This Master’s Thesis concerns itself with effects of an economic crisis on the Spanish university graduates. Instead of economic facts, number and figures, it considers the human cost of the crisis by using qualitative methods. The data consists of six, semi-structured, in-depth interviews with Spanish university graduates and then was analysed by qualitative content analysis. To conceptualise the results of data analysis further, peace researcher Galtung’s theory of structural violence was used. The theory takes into consideration both the individual and social context. It also analyses the circumstances at which structural violence turns into direct violence. For example can mass youth unemployment turn into a violent conflict?

Structural violence is present in lives of the interviewees as in general in the Spanish society. The inequality and injustice have increased during the economic crisis.  Due to the budget cuts and reforms, people have unequal access to society’s resources such as employment, pension schemes, education and health care. Educated young people are either unemployed or employed in jobs that do not correspond their educational level, and in precarious labour conditions. Structural violence causes frustration, fear and insecurity among the interviewees. They feel mistrust towards politicians and the political system in general.

Frustration among the interviewees was overwhelming. Collective frustration caused by unemployment and low future prospects might have severe social, economic, and political consequences in the future. These consequences can be seen in regions such as North Africa and the Middle East, where unemployment rates among young people have reached 20% during the past 20 years. Massive youth unemployment is a risk to social cohesion on the other side of Mediterranean. It should be questioned, whether the Spanish government and European Union do not have any other options to handle the economic crisis by impoverishing the younger generations? Losing a generation can have surprisingly high cost in the future.