Analysis of evolutionary pressure and pathogenicity of missense variations 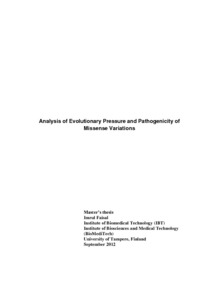 Background and aims: Gene and protein sequences are subject to variation upon reproduction where favorable alleles are expressed in further generations by positive selection and bad alleles are being eliminated by means of purifying selection. Thus, selective pressures acting on sequences can result positive or negative selection upon evolution. Ka/Ks ratio is the ratio of non-synonymous and synonymous substitution rate. Calculation of Ka/Ks ratio returns selective evolutionary pressure acting on a particular gene. However, codon wise site specific Ka/Ks ratios calculated for each amino acid differ from the overall selective pressure active on the respective gene. This study was aimed to calculate site specific evolutionary pressure of specific human missense variations of both neutral and pathogenic type and to retrieve hidden facts underlying in it. In addition, analysis of pathogenicity of variants was also another major aspect in this research.

Methods: Variation data were obtained from VariBench database. Gene and respective protein sequences reported in the dataset were downloaded along with their orthologs to calculate site specific evolutionary pressures. After that, Ka/Ks values were calculated by Selecton software for each amino acid. Finally, statistical analyses were performed with R to examine selective pressure distribution separately for pathogenic and neutral variations. In addition, pathogenicity was also calculated for individual amino acids and for different amino acid groups.