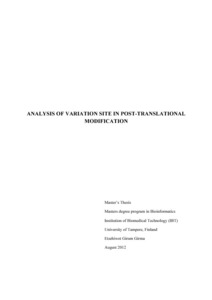 Experimentally verified post-translational modifications were downloaded from Human Protein Reference Database (HPRD) web site. The Single-nucleotide Polymorphism (SNP) data, which contains both pathogenic and neutral missense variations, were matched against the post-translational data to filter out Post-translational Modifications (PTMs) in variation sites. DRUMs, WAVe and Locus specific databases were used to separate disease-causing variations, which occur at the PTM sites. To study the conservation of the variation sites ConSurf was used and a statistical analysis was done by using hyper geometric distribution and t- test.