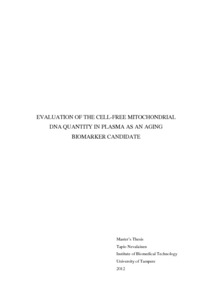 Background and aims: Individuals of the same species may have large variations in their ageing rates, especially notable at higher ages. Therefore, it is proposed that chronological age is not suitable for measuring ones functionality, but instead the concept of biological age should be used. To define individuals biological age the biomarkers of aging have to be first established. In a previous study, the cell-free DNA concentration in plasma was reported to be higher in older individuals, making it potential aging biomarker candidate. The aim of this study was to further analyze the cell-free DNA. This was carried out by quantifying nuclear and mitochondrial DNA, the two fractions of cell-free DNA, separately.

Materials and methods: The plasma and PBMC samples were collected from the participants of the Vitality 90+ study who were of 90 years of age. Control group consisted of healthy young laboratory personnel. The cell-free DNA was extracted from plasma samples as well as total DNA of the PBMC. The nuclear and mitochondrial DNA copy numbers of all samples were determined separately with quantitative PCR by using specific primers. The obtained mitochondrial DNA copy numbers were scaled to nuclear DNA copies and compared within and between the groups.

Results: No significant difference in plasma mitochondrial DNA quantity was observed between nonagenarians and controls. In contrast, the plasma of nonagenarians contained significantly higher levels of nuclear DNA.

Conclusions: The mitochondrial DNA quantity in plasma seems to be inadequate parameter to be used as an aging biomarker. However, because only two distinct groups were compared: the young and the very old individuals, the obtained data does not address the issue of a linear correlation between chronological age and mtDNA quantity in plasma. Additional studies are also needed to demonstrate whether there are differences in plasma mtDNA quantity between the successfully and unsuccessfully aged individuals.