The Association between Mahjong Playing and Metabolic Risk Factors: A Community-Based Study 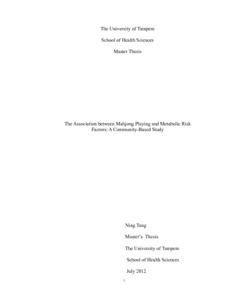 The results showed that the prevalence of playing mahjong was 39.8% among 2076 responders. A lack of association between playing mahjong and the risk of metabolic syndrome was noted (odds ratio [OR]: 1.02, 95% CI: 0.77-1.35); however, different direction of association was noted between genders (OR: 0.93, 95% CI: 0.66-1.30 for male and OR: 1.50, 95% CI: 0.97-2.31 for female). By looking at five individual components of metabolic syndrome, lower high-density lipoprotein cholesterol (OR: 1.40, 95% CI: 1.03-1.91) and higher triglyceride level (OR: 1.33, 95% CI: 1.03-1.72) were noted in players when compared with non-players, even adjustment for age and gender. In conclusion, although there is a lack of association between playing mahjong and metabolic syndrome, this hobby adversely affects blood lipid components in this community population.