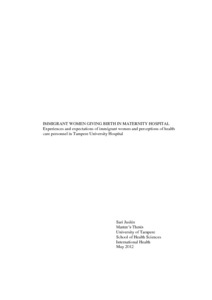 Finland along with most countries in the Northern Hemisphere continues to see increased migration into the country. As the proportion of immigrants in regard to the entire population continues to grow immigrant health and well being become increasingly significant areas of investigation. Maternal health may be considered to be at the forefront of emerging challenges of the field. At this time, relatively few qualitative studies have been conducted from the perspective of immigrant women as to how they perceive and experience care received in the hands of local health care professionals. In general, there has been more of a tendency to uncover aspects of care from perspectives of the caregiver.

The objective of the study is to convey experiences and expectations of immigrant women regarding the care they received while giving birth and being admitted to the Tampere University Hospital (TAYS). Perceptions of midwives working at the Pregnancy and Labour Unit of the hospital involving distinct needs of immigrant women are conveyed. Possible similarities and distinctions in perception of the two counterparts are also examined.

The study was conducted from through two phases of thematic interviews in February -March 2012, the first with immigrant women living in the Greater Tampere region, the second among midwives of the hospital. Selection methods utilized at different stages were intentional, snowball or referral and random sampling. A total of 8 women’s and 10 midwives’ recorded interviews were transcribed to accumulate a total of 166 pages of data of which 117 pages had been translated from Finnish to English. Analysis was conducted via abductive content analysis and viewed from cultural competence context.

Although immigrants interviewed were able to least reasonably communicate in English or Finnish and general views expressed as to experiences and expectations of these women not deviating much from local women, the predispositions were found premature and even misleading. Supportive evidence was irrefutable. Results revealed a genuine need for the individual health care professional to begin developing one’s capacity for culturally competent care. The study indicated culturally competent communication and interaction skills to be a major determinant in the manner care is received and perceived. It is a factor reflecting on both patient satisfaction and short as well as long term patient wellbeing.

The researcher views the findings of the study to be inclined to apply to a broader population of immigrant women.Offering care that may be viewed as culturally competent is a long term goal that demands strategic and operational level changes in organizations.Without fundamental changes even the most culturally competent of care givers would be limited in their capacity to offer care that is sensitive to the needs and expectations of women of diverse cultural backgrounds.