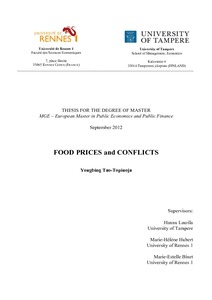 Food prices surge during 2007-08 has induced an enormous impact on the whole world, especially on the Sub-Saharan African countries. The factors that caused the food prices surge during 2007-08 have influenced food prices in different levels. The factors can be analyzed by demand and supply model. On the demand side, the factors include biofuel conversion effects, speculative effects, and the food consumption structure changes in China and India. On the supply side, the factors include export restrictions effects and livestock feeding effects. However, none of the factors could be ignored, since there are psychological impacts that can enlarge the effects. Conflicts, especially riots and the armed conflicts, intrastate conflicts, non-state conflicts and one-sided violence have been occurred in many Sub-Saharan African countries during 2007-08.

Hendrix, et al. (2009) stated that “relative deprivation” hypothesis combined economic and psychological factors. The hypothesis focused on the factors that related to people’s basic needs, perceived entitlement and expectations. Relative deprivation based on economic grievances that related to economic growth, inflation and the changes in the international market prices of major trade products, the level of income and the income change. Conflicts might be onset once people could not achieve what they desired or when their “relative deprivation” increased. The case study in this thesis related to 32 low-income Sub-Saharan African countries (excluding oil countries). In order to investigate economic grievances, I separate these 32 countries into importing countries and exporting countries. I focus on the eight riots’ countries – Senegal, Mozambique, Mauritania, Guinea, Ethiopia, Cote d’Ivoire, Burkina Faso and Madagascar.