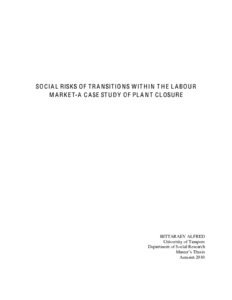 My thesis examines social risks of the employees made redundant. I research the earning losses and career perspectives of the dismissed labour force. Further, I study how different social characteristics affect income and career perspectives and what kind of risks are associated with loss of the income or decrease in career possibilities.

My goal is to contribute to the knowledge of collective dismissals using empirical data and analysis. Subject is important and current because the ongoing process of globalization has a growing impact on the national labour relations and on the national labour markets. Moreover, well-known concept of economic cycles becomes a new dimension of labour market theories, since the same processes are going different ways in the era of growth and recession.

The empirical analysis consists of two datasets: European working conditions survey 2005 and data from The Perlos Corporation gathered in 2008 after the negotiations on the exiting plant had proceeded to an end.  The first dataset had a representative sample of the Finnish population of 1039 people. The second dataset had a representative sample of the former Perlos employees of 508 people. There were two methods of analysis used in this paper: the non-parametric alternative to the t-test (comparison of two independent samples based on Mann-Whitney criteria) and log-linear modeling.

On the ground of my research, I expect social selectivity embedded in the labour turnover. Indeed, longitudinal study of the former Perlos employees would reveal almost all the interesting forms of social selectivity. However, the present analysis still has its own mean of investigating the social risks of the redundant employees. I find selectivity in the career advancement of the former Perlos employee first of all in terms of gender. The results describing the behavior of men are not significant in explanation if their attitude towards career is dependent on occupational status in The Perlos Corporation. On the other hand, the results for women are significant suggesting that those women who worked as managers are concerned about their career on the new job (after closure). My findings are coherent to the previous findings in literature, proving that the chances to maintain the income after the loss of job are higher for skilled male employees who had resigned themselves before the closure of the plant occurred. These workers are more flexible and not attached to the one employer; they can find external job opportunities without the necessary participation in active labour market policies.