Model based development of speech recognition grammar for VoiceXML 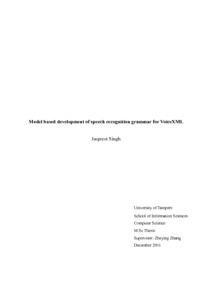 The VoiceXML uses a grammatical base to recognise the user utterance for the commands. This thesis applies the model based development approach to create a hierarchical data model for the speech grammar. Further, the grammar has been separated from the interaction code. MetaEdit+ tool has been used for developing the grammar model and for generating the grammar file.