The effect of the mental-state attribution of gaze as "seeing" on autonomic arousal responses to gaze cues: The mediating roles of self-awareness and presence 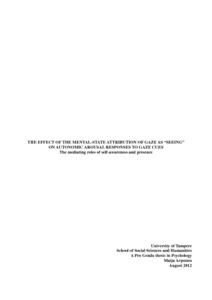 At times perceiving direct gaze causes higher autonomic arousal than perceiving averted gaze. Such different responses–notably found between face-to-face and pictorial gaze–have been suggested to be caused by attributing a live gazer with the ability to see: The direct gaze of a live onlooker may cause people to think that they are seen and heighten autonomic arousal. Being seen has also been linked with changes in self-awareness. We wanted to examine if the thought of being seen paired with a direct gaze would intensify autonomic activation and heighten subjectively reported self-awareness and arousal when compared to averted gaze and not beeing seen. To separate live gazing stimuli from the ability to see we used live-feed of a face on a television screen, and varied the reciprocity of a video link. The participants could see the face of the model in both conditions, but the model was claimed to be able to see them only in the reciprocal condition.

According to our results the mental attribution of being seen does not have an effect on arousal, but it makes people focus on themselves and changes the way they perceive their arousal state. Previously reported larger autonomic responses to direct gaze than averted gaze are suggested to capture the affective significance of both physical and social presence and be further affected by adequacy judgments. Effects of stimulus mediation through a video-link are discussed. Further research is called for to confirm the results and to better understand how these factors may modulate autonomic arousal when perceiving gaze.