Corporate Social Responsibility: Translation of the Concept and Practice in China 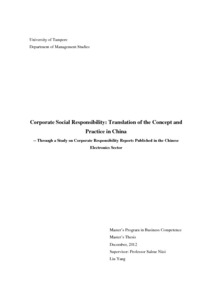 With an increasing awareness to global climate change, social structural change and the consequences of the financial crisis, the continuous debate on Corporate Social Responsibility (CSR) has transformed it from a novel term to an essential item in every business practitioner's agenda. The CSR movement started inEuropeand US in the early days of 20th Century, but the conduct of business ethics is way beyond the history of CSR development.

The penetration of globalization helped the spread of CSR concepts worldwide.China, as an important contributor to the global economy, learned the ideas from the well-developed countries and followed the trend of CSR disclosure. Since 2007, the number of responsibility reports has been growing at an accelerated pace inChina. Companies in Chinese electronic sector are the leaders in CSR reporting.

From various perspectives, scholars and business practitioners in China view CSR as an "imported" idea. This study follows a line of global-local-industrial, to investigate how the concept is interpreted and has been developed in China. Among many of CSR issues that are reported by electronics companies, this study focuses on disclosures in economic, social and environmental dimensions. The primary research methodology is multiple-case studies with qualitative content analysis. A total number of 12 reports published in 2008-2010 by four companies is studied in this paper. The study revealed three commonly referred importance of CSR in China: carbon emission reduction, emphasis on honesty and integrity and significance of ISO standards.