Managing the Arab Spring: Reactions of the International Community to the Crises in Libya and Syria 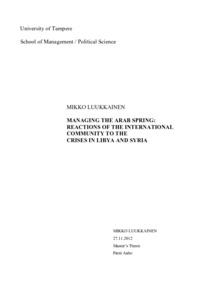 Both conflicts belong to the chain of revolutionary uprisings known as the Arab spring, which started to unfold in Tunisia in December 2010. In this chain of events, however, Libya and Syria stand out, because in them the level of violence has been the most extreme.

The differences in the reactions of the international community are analysed through five institutions of international society: great power management, diplomacy, sovereignty, equality of people and the market. The tools of analysis come from the English school approach to international theory.

The research material of the thesis consists of statements and comments made by the leaders of the so called great powers, as well as the United Nations Security Council’s resolutions on Libya and Syria. The term great power, in this study, refers to the permanent members of the Security Council – the United States, Russia, China, Britain and France. The research material is supplemented by analyses and news articles. In all, 74 texts have been chosen as primary sources.

The analysis reveals that, in the case of the Libyan civil war, there were many factors that made outside intervention possible, even appealing. In the Syrian case, however, the analysis reveals many difficulties with intervention. One of these reasons, it can be argued, is the legacy of the Libyan crisis, which strained the relations of great powers.