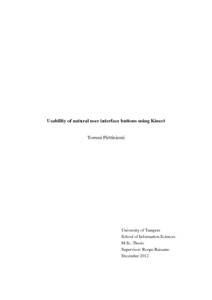 The Kinect device opened a world of new possibilities for developers and user interface designers to explore. With Kinect, users can interact with user interfaces by using just their hands and body. A typical example of a natural user interface, or NUI, is an Xbox 360 game that uses Kinect as its only input method. The PC version is faster and more accurate than its Xbox 360 counterpart. This encouraged us to research ways and methods how we could utilize it in terms of improved usability. Unfortunately, the NUI takes us a step backwards in terms of usability, since no haptic feedback is available when interacting with it. The theory of NUI is a decades-old research field, but with the advances in technology in recent years, it has finally become a reality for the consumers.

Using just your body to interact with the NUI is slow and sometimes error-prone compared to the classic mouse and keyboard interaction. Our main research question was how to speed up the interaction with NUIs and still keep it easy, accurate and nearly error-free.