Perception of family support by adult children in Finland and Russia 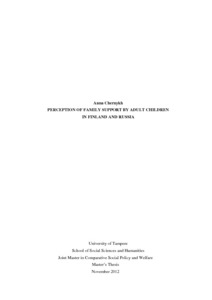 While the population of Europe is ageing, and social welfare system is struggling to provide the support for elderly and to make up strategies for keeping up the social security on a satisfying level, on the micro level the family is experiencing structural and functional changes. The actual research lies on the crossroads of these social issues.

The vital problem of how to provide ageing individuals with the care and support they need is approached from the perspective of the potential supporters: adult children. In particular, I was interested in how they perceive the family support duties that may occur in their future, how they regard them and plan to cope with them.

In order to answer the research question I interviewed 12 informants, half of them Russian and the other Finnish whose, parents are in the pre-retirement age. The comparative approach allowed me to compare the support arrangements in Russia and Finland and to perceive the sharper differences across the family discourses in these two countries.

Having completed the discourse analysis of the data, I have learnt that regardless of the social welfare regime individuals belong to, they have varying perceptions of family support and reciprocation acts inside the family network. For instance, it is believed that pensions in Russia are small, yet many elderly parents still support the families of their adult children. In Finland with its well-established formal care institutions, there were discourses confirming and denying the chances for ageing parents to go to the elderly houses. Despite the general trend of individualized society, Finnish adult children are still involved in reciprocation and mutual transaction of help and support with their parents, with few contrary examples.

My thesis provides a better understanding of the family support phenomenon and adds a scientific value via the study of support perception by the adult children and offers a conceptual framework exploited as the analytical outcome of the research. Individuals build up perceptions of support on their assumptions of moral family obligations, established patterns of reciprocity and dependency. The result of the study is that family support may be seen as a burden - however, many individuals do not reject to undertake it, and perceive this obligation as granted, and in fact family support activities are still relevant and imperative. The conceptual framework developed in this Master’s Thesis may be used in any other Social Policy study of family support and care.