One UN for Development? The United Nations as an Actor in International Development 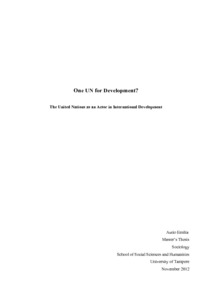 In this thesis I analyze the work of the United Nations (UN) in international development, and especially the aspects of power, authority and autonomy in this work. I examine the roles that the organization has in development and the effects these roles can have on the position of the organization. Following the ideas of the bureaucracy theory by Michael Barnett and Martha Finnemore (2004; 2005), I study if the UN can be seen as an independent actor rather than a tool of its member states. Inspired by my own experiences at the UN, I also pay attention to the position of the organization between the often conflicting interests of its member states.

My study is placed among studies of international organizations (IOs). The scientific relevance of the study lies in the political aspects of the work of IOs. They are increasingly central to world politics and therefore it is important to understand how they function. If IOs are able to use power and affect their surroundings, this should be taken into account while studying them. Power aspects are also central to discussions around international development, as there is still a persisting gap between the views of the global North and South. The UN with its universal membership lies in the middle of this battle.

As research material I have nine (9) reports of the UN Secretary General, produced in 2007-2012. The reports are all development-related, some of them focusing on the internal work of the UN and some on the wider development environment. I analyze them using qualitative content analysis.

One of the interesting results of the analysis was the strong support the UN was showing the developing countries throughout its work. The organization can be seen as opposing some of the mainstream development policies and supporting a more equal development approach. This stance can provide the organization with both challenges and possibilities as it is trying to stabilize its position as a central particle in global governance.