Media representations of Russian authorities in Russian and foreign political cartoons during the presidency of D. Medvedev 2008 - 2012 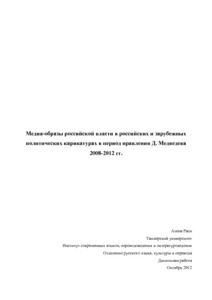 Political cartoon is a democratic art form and part of political discourse. Like a “mirror of today” it reflects current political affairs on domestic and international arena in a humorous or sarcastic way. This study looks at the political cartoon as a complex multimodal text which conveys a certain message through its visual and verbal components.

The aim of the study is social-semiotic analysis of media representations of Russian political authorities in political cartoons in Russian and foreign printed as well as digital media during the presidency of D. Medvedev in 2008 – 2012 .This period is of particular interest since it was the time when a new form of governance in Russia, a “tandem V. Putin – D. Medvedev”, was born.

The theoretical basis of this study is the social semiotic theory of visual representation, which holds that a process of representation is motivated by cultural background of the sign-maker and realized in particular context. Images are seen within a realm of ideology and institutions of power.

The material for this study was collected from Russian and British printed newspapers as well as largest online freelance cartoonists’ collectionscaricature.ruandpoliticalcartoon.com.

The material has been analyzed using Kress & Van Leeuwen’s “Grammar of Visual Design” and Meshcherkina-Rozhdestvenskaya’s approach to analyzing visual material. Furthermore, the analysis contains references to other Russian research practices such as explaining intertextual connections and looking for precedential phenomena. The interpretations of the cartoons have been made from the Cultural Studies point of view in the realm of recent political events in Russia.

The cartoons that have been analyzed create strong contrast between the power of D. Medvedev and the power of V. Putin. In fact, representations of V. Putin showed his dominant role during D. Medvedev’s presidency. The findings have been discussed in detailed and grouped into 5 cases: