First-Person Shooter Controls on Touchscreen Devices: a Heuristic Evaluation of Three Games on the iPod Touch 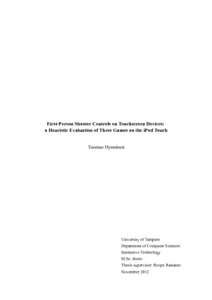 Today's touchscreen devices have a large amount of computing power which enables them to run high performance software, such as first-person shooter games rendered in 3D. Devices such as the iPod Touch that were originally built for music and other media consumption also provide a wide variety of features. For example, the iPod Touch can be used to surf the Internet, play quality video and audio and run complex video games.

This thesis concentrates on first-person shooters games on the iPod Touch and provides a detailed breakdown of how developers have used the device's touch interface in their games. Related research, especially regarding first-person shooters and touch input, is explored and discussed. Completely new heuristics were developed in order to analyze the properties and effectiveness of the controls.

In total, three iPod Touch games and nine control modes were evaluated. The results showed that the effectiveness of the controls was lacking. Target acquisition and tracking proved to be especially problematic. The results followed conclusions and observations made in related research. Suggestions for future work include investigating touchscreen hardware improvements and exploring different FPS game designs for mobile platforms.