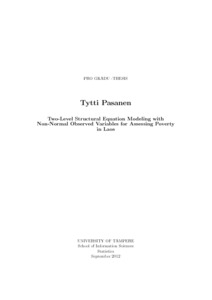 This thesis introduces a recently developed method, two-level structural equation modeling with non-normal observed variables. The method is applied to household poverty assessment with a survey (n=1564) collected in Lao People's Democratic Republic in 2011. Due to multi-stage clustering in the sampling design, the assumption of the observations' independence is violated. Multilevel modeling ensures this design effect is not ignored.

Structural equation modeling is a flexible method combining confirmatory factor analysis and path analysis, with the ability to model complex causal relations. If the model parameters are estimated with weighted least squares, one is able to model ordinal observed variables often found in survey data. Multilevel methods are currently developed for two-level modeling. They allow examining variation in a data on two levels simultaneously. Multilevel models divide observed variables into two components. Cluster means are modeled on the between level and individual effects, that is, the deviations from the cluster means, are modeled on the within level.

Poverty can be defined in a number of ways. This thesis examines the relation between two poverty indicators, monetary expenditure and the multidimensional poverty index. The latter is modeled by a latent factor structure with three parceled indicators: health, education and living conditions. On the household level, the effect of household size on poverty indicators is considered. On the village level, the number of services and infrastructure are assumed to influence the poverty measures. The final obtained model is valid in terms of the fit indices designed for model assessment. The results show that expenditure and multidimensional poverty are significantly related on household and village levels but the dependencies and relations are stronger on the village level. Infrastructure has a significant impact on the level of poverty in a village. Conclusively, the study suggests that poverty can be decreased effectively by improving communal services.