Extended or exhausted - the production, form and reception of downloadable content in Skate 3 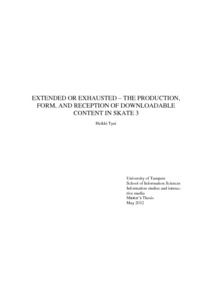 The introduction of online connectivity and a hard drive has changed how console games can be marketed and sold, as it is now possible to patch, update, and publish more content after the game is released. Downloadable add-on content (DLC) is the latest, and still evolving, formatting strategy in the long line of entertainment industry franchising practices. A digital attachment to the physical game copy, DLC is used to guide players to networked service relationships and to uphold these services, while prolonging players’ time with the game through offering more content. Because of its smaller size, DLC is quickly developed and can be used to mitigate financial risk, to bridge the gaps between bigger franchise installments, and to better answer the needs of the fragmented niche markets.

In this thesis the benefits and ramifications of DLC, both for the gaming industry and to the player community, are examined. I ask how DLC, as a marketing practice, affects the play and the surrounding culture of console games. More specifically, in what ways does the DLC model affect the ways console games are marketed, and, in what ways does the player community respond to these marketing strategies? The thesis approaches the DLC model through a case study of the skateboarding game Skate 3. The methodological approach consists of a three-fold media industry analysis focusing on 1) cultural production and political economy analysis, 2) cultural texts, and 3) the reception and effects of those texts. These layers are then used as lenses to dissect the respective areas of the DLC model utilized in the case game Skate 3. Tying into each other in surprising depth, the production, distribution, and the textual form of DLC are examined through critical political economy analysis, whereas the player reception is opened by secondary data analysis of user discussions on the gaming forum NeoGAF and on the official Skate blog.

Visible within the DLC system is the fact how marketing imperatives have shaped the form of the digital game to better answer their needs. Through leveraging the fragmented form of DLC, options open for controlling both the competition and the player population. As games can be used again after consumption, it is in the interests of the gaming companies to artificially limit this second-hand access to them. DLC provides a solution to this, as it is bound to the first buyer and cannot be sold forward. To get the “full experience”, second-hand users, too, must pay. Thus DLC can be used for exploiting the power its production structure has over individual. Players are enticed to buy more expensive new game copies, coaxed into service relationships, and leveraged towards other franchises. A central method is to utilize DLC’s fragmented form and use DLC packs for rewarding players when they conform to the marketing plan.

The ramifications of the new digital economy come as a surprise to many users. DLC divides the play experience into several pieces, denying the player the “whole experience” unless she buys all the DLC packs. Player groups are forced to buy the same DLC packs to play the same content. As many users still do not have the ability to play or pay online, the online components create haves and have-nots. Players are also forced to gather information about the model on the Internet and left to wonder whether or not DLC even works in certain situations. For many players DLC spoils the customer experience by accruing additional costs over time, making players feel they are charged for content they have already paid for, and by selling a service that simply seizes to function over time. The publisher Electronic Arts contradicts itself by, on the one hand giving an implied promise of a service relationship and basing Skate 3 forcefully on online components, and on the other hand letting its game servers and customer support deteriorate, abruptly disbanding its game service once it seizes to be profitable.