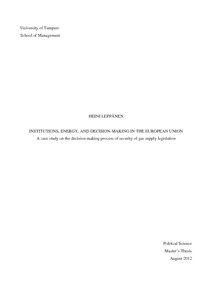 This thesis is built around the decisions that led to the legislation on security of natural gas supply which first consisted of a directive (OJ L 127, 29.4.2004) that was then changed to a regulation (OJ L 295, 12.11.2010) concerning measures to safeguard security of natural gas supply. I study the decision-making processes behind the legislation on the security of gas supply and the role that the main institutions of the EU, namely the European Commission, the Council of the European Union and the European Parliament, play in the process.

The theory used in this thesis is based on Mark A. Pollack’s (2003) perception of the principal-agent analysis in rational choice institutionalism. The analysis is guided by this theoretical framework. Based on the main theory, I formulate two general research questions and three sets of hypotheses. The formulated hypotheses determine which categories were used when interpreting the gathered evidence. The method of my thesis is an intrinsic case study. The case is the decision-making process that led to the legislation on security of natural gas supply. The primary material for this research consists of the official documents written in the process of formulating the directive and regulation. These documents were supplemented with journalistic reports.

The main result of this thesis is a founding according to which the roles of the institutions did change in the course of the decision-making process. The Council started as the dominant actor in the decision-making process of the directive, possessing the most influence on the conduct of the process and consequently, the resulting decisions. The Commission and the Parliament were left with the roles of a weak agenda-setter and a junior legislator. As the decision-making process proceeded to the regulation, the roles of the institutions changed. The Commission’s agenda-setting behaviour became more assertive and it was able to achieve a larger number of goals than earlier. The Parliament’s role changed from junior legislator to the Council’s co-legislator as it was able to engage itself into a fairly equal bargaining with the Council. The Council, on its part, had to give up its dominant position and accept a more balanced decision-making process with the other institutions, forcing it to assess its preferences in a more critical way. In terms of a zero sum game, the Council lost influence in the course of the legislation process whereas the Commission and the Parliament gained influence.

The reasons behind the change in the roles of the institutions include the changing legal framework of the EU, namely the ratification of the Lisbon Treaty which gave the Commission and the Parliament more influence in the decision-making processes by extending the application of the co-decision procedure to decision-making on energy. Another reason for the change was the gas disruption between Russia and Ukraine in 2009 which brought the matter of urgency into the equation as the Member States preferred a quick adoption of a new regulation compared to the option of continuing with the already existing directive.