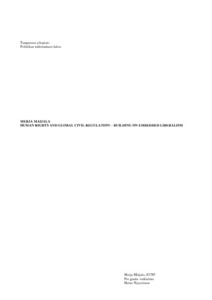 Protection of human rights has changed due to change in the international arena. Today, the international arena consists of various actors and if some fifty years ago states were the primary actors, those have had to give in for a set of different civil society organizations (CSOs) and, foremost, different sized enterprises. This change is connected to the difficulty to define the concept of human rights. Additionally, it is not self-evident how human rights concept and practical obligations to protect human rights are being formed and understood. The very latest development in the area of human rights and business – that was initiated by the UN – is a research conducted by John Ruggie in the role of Special Representative of Secretary General (SRSG). The target of my research is to clarify what can be found from the research conducted by SRSG the by using narrative methodology and whether it is based on the theory of embedded liberalism.

The reports (primary material of this research) were produced by the SRSG during the mandate of the UN (2006-2011). Consequently, the attempt is to find out what exactly the primary material has to say in the light of the selected theory and methodology and how it fits into the existing context of human rights and business. The theory of embedded liberalism can be simplified as a joint institutional framework, which consists of state power and interests, prevailing social expectations, norms and economic ideas.

Narratives can be defined to be used as a common tool in communication and understanding the world. The “core” of narrative methodology is understood in this research as noticing stories as transmitters and creators of the reality and meanings.  The narrative attributes used to dissect the primary material are temporality and event sequencing, intertextuality, and roles. In addition, connected to intertextuality and a change in the international sphere, locus of narratives is briefly presented. Paradoxically, by using this kind of reductionism with the help of narrative attributes, the primary material can be better set into the contexts of the “big picture” of human rights. For this purpose there are separate chapters for clarifying the concept of human rights and civil regulation, although these are covered jointly in the theory section. Therefore, it can be said that the selected theory and methodology are slightly overlapping.

The primary material seems to be based profoundly on the theory of embedded liberalism. The tone of the report is cooperative and there are several referrals of state activity to hear and execute social expectations with the help of social institutions – of which market mechanism is a part. It can be said that the need to promote social expectations and norms in conjunction with state power and interests is quite visible in the primary material. The framing of the reports seems to be much based on noticing a change in the actors of the global sphere. There is also a referral to the historical approach, in which the wanted target state is tied and explained with the help of embedded liberalism history timeline. Further on, there are implications that the current set up does not enable societies to protect proper social values, since there are several referrals in the primary material to inadequate capability of societies to protect and promote the core values of social community. Besides referring to a lack in states’ – and in general civil society’s – capabilities in the current global sphere, it is being indicated that rules, customs and institutions are needed for markets to sustain but also for a society to manage any adverse effects of market dynamics. Additionally, it is stated that this kind of institutional support in place would also enable to embed markets in broader values of a social community.

The primary material has both linear and process-based narratives in place. The primary material is set in a global context by noting the most previous works done under the mandate of the UN, before the SRSG’s mandate was released. Also, there is an impressive elucidation done by the SRSG in the primary material for mapping elements from the current international law, various soft law mechanisms, and models for self-regulation. Nonetheless, intertextuality and roles are overlapping even more; therefore, the primary material is also being set into context by defining clear cut roles for states and companies. Roles that are the most relevant in the primary material are the roles of states and corporations. The role of states as a human rights protector is declared to be based on duty, while the role of corporations is based on responsibility. Surroundings – the locus – where narratives take place is the global public domain. It can be noted that there are several narratives (not just human rights - business narratives) coexisting in the constantly changing global public domain. Since it is not clear what kind of public authorities exist – if there are any kind of, it is difficult to study any hierarchical or other structures of narratives in the global public domain.

The basic philosophy of narratives used in this research is noticing stories as transmitting and creating reality and meanings.  With regard to this, the work done by the SRSG can also be seen as transmitting and creating for its part the world as we understand it. Receivers of the narrative (i.e. readers of the primary material) will partly be using the material created by the SRSG to create and revise their approach to business and human rights. This is not an apparent function, but a subtle way for creation and recreation of outlooks, and also continuing to redefine elements that are needed for finalizing this outlook. In a way, this relates also to pragmatism as a (scientific) community is recreating new approaches based on the existing ones.