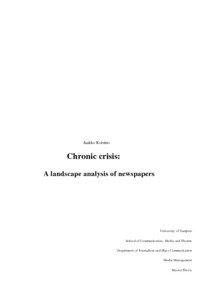 This study began with an idea to apply crisis management to the newspaper context. The future of newspapers has been a hot topic of discussions in recent years. Several claims have been made that the newspaper industry is in a crisis and that the future of newspapers is bleak, but no previous research has been made to analyze newspapers from the crisis management perspective. The aim of this study is to look into these claims and assess whether these claims are indeed credible.

This thesis is qualitative in nature. The results of this study are based on extensive desk research and empirical data collected from altogether nine newspaper managers representingEtelä-Suomen Sanomat,Helsingin Sanomat,Turun Sanomat,Aamulehti,HufvudstadsbladetandUusi Suomi. Results of the empirical data-gathering were analyzed using a theoretical framework that consisted of the landscape model of crisis management, complexity theory and competitive strategy. Also two strategic tools, PEST and SWOT analysis, were used to categorize the findings.

Results of the research suggested that newspapers are in a chronic crisis caused by overlapping causes. Findings suggest that crisis is a complex notion and that the interpretations of crises differ significantly. The situation for newspaper companies differs between regions and different kinds of papers, but the overall trend is that Western newspapers are in decline, while newspapers in many developing markets are on the rise. The crisis itself is not acute, but chronic in nature. The crisis will have a less severe impact than so-called sensational crises, but the consequences will be long-lasting.