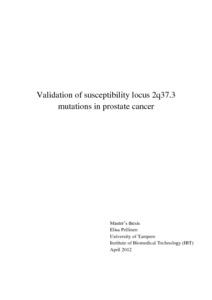 Background and aims: Prostate cancer is the most commonly diagnosed cancer in men in Finland and other industrialized countries. The causes of prostate cancer are still relatively poorly known, but family history is one of the most established risk factors. The progression and clinical picture of prostate cancer is hard to predict as some prostate cancer cases remain indolent for decades while others progress and metastasize rapidly. To improve the diagnostics and allow more accurate prognosis, better predictive tools are needed to recognize the rapidly progressing cases from the indolent ones. Genetic markers such as single nucleotide polymorphisms are the most promising candidates. The aim of this study was to see if certain chromosome 2q37.3 mutations are associated with prostate cancer in general or with a certain clinical characteristic of the disease, in this case serum PSA value. Secondary aim of this study was to evaluate the novel KASPar genotyping technology as a possible replacement for TaqMan genotyping.

Methods: Analyzed samples were DNA samples from both familial and sporadic prostate cancer cases. As controls, samples from healthy blood donors from the Finnish Red Cross were used. Each sample was genotyped for each mutation using one of four genotyping methods: TaqMan genotyping, KASPar genotyping, high-resolution melt analysis (HRM) or direct sequencing by Sanger method. Some of the mutations were genotyped with both TaqMan and KASPar assays to compare the two technologies. Based on the genotyping data, association of each mutation with prostate cancer was calculated.

Conclusions: This study suggests that IQCA1 237247036insA is associated with familial and sporadic prostate cancer and is possibly a protective factor. SCLY-UBE2F 239002480delTTG was found to be associated with familial prostate cancer, although a problem in genotyping was observed and further confirmation of the result is in order. The existence of predisposing variants in chromosomal locus 2q37.3 confirms that this region is interesting in regard to prostate cancer susceptibility. As a result of this study, the Genetic Predisposition to Cancer research group of Johanna Schleutker adopted the novel KASPar genotyping technology as one accepted tool for genotyping.