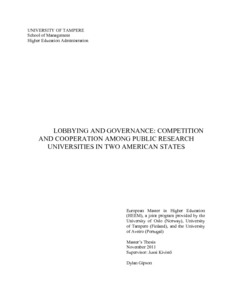 While governance and lobbying practices by public universities have both been considered as factors in the ways that American states fund their public higher education systems, there has as yet been no research on how boards of governance influence the lobbying behaviors among public universities under their purview.  This study uses comparative case study methodology to frame the policy-shaping behaviors of the higher education systems of two American states, one with a consolidated governance board and one without any such agency.  Through interviews with 2 in-house lobbyists in each state, this study shows that a board of governance limits the autonomy of institutions and encourages cooperative lobbying strategies.  In the state without a governance body, institutions are less likely to collaborate, especially because the lack of a central governance board has allowed for institutions to become highly individualized in terms of campus policies.  Population ecology theory provides a useful model for conceptualizing these relationships: the board provides partitions that maintain stable environmental niches for public universities.  Without such a board, public universities are free to adapt to new situations, which causes competition as institutions attempt move into occupied niches.