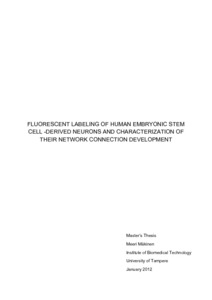 Cell transplantation therapy is an alternative treatment for defects in tissues with poor regeneration and lack of efficient treatments. One of such tissues is the central nervous system tissue. However, cell transplantation therapies of the central nervous system are known to suffer from the poor survival and inability of the transplanted cells to integrate as a functional part of the target tissue. The integration of transplanted cells into the central nervous system has been observed to resemble the integration of newborn into the developing brain of the fetus. This developmental period is characterized by spontaneous neural network activity. Similar network activity has been observed to form in embryonic stem cell derived neural networks. The aim of this study was to optimize fluorescence labeling methods to allow the visualization of combined human embryonic stem cell derived neural cell populations and to study the formation of the earliest network connections.

Neural cells were derived from human embryonic stem cells and labeled with fluorescent dyes (CT, SR101) using different concentrations and incubation times. Retainment, effect on cell viability and proliferation, cell type specificity and suitability for co-culturing were studied with imaging, fluorescent staining, immunocytochemistry and microelectrode arrays. The formation of the earliest network connections was studied pharmacologically by measuring the change in activity with either microelectrode arrays or calcium imaging.

The optimal parameters for CT were 72 hour incubation in 10μM dye concentration and for SR101 8 hour incubation in 10μM dye concentration. CT was able to label cells up to a 4 week observation period, did not affect cell proliferation or viability and labeled all the cell types. CT was found to be suitable for co-culturing studies. SR101 seemed to label astrocytes dependent on cell line and maturation stage. The early network activity was found to be mediated by gap junctions, glutamatergic and GABAergic connections, thus resembling the connectivity observed to occur during development.