The Prime Minister's Glasses - World view in Great Britain at the end of the Cold War, as portrayed in the BBC sitcom Yes, Prime Minister 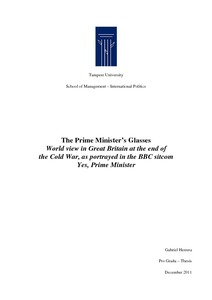 This thesis is an investigation into what the television series Yes, Prime Minister tells us about the views people held about the world and Great Britain’s place in it during the later half of the 1980’s, a period of significant importance, since it marked the end of the Wold War. Furthermore, the thesis attempts to find if these views can be expressed through some theory of international relations, as theories are taken to be frameworks through which we make sense and understand reality. Yes, Prime Minister was chosen due to its strong emphasis on the higher levels of government and foreign politics. All 16 episodes of the series were used and amended by a single stand-alone episode, which sets the basis for most of the characters and plots.

The basic assumption of the thesis is that popular media and particularly political satires, both reflect the views of its audience, as well as, influence and fortify these views. In other words, political satires can be considered commentaries on actual events and for a satire to be popular it has to express in exaggerated form what the audience commonly feels. As such, political satires are political in nature and influence, granting them a place in our everyday political lives. Yes, Prime Minister was, and still is an extremely popular television series, making it an ideal source for investigation. Satires also serve as educational and informative programs to many of their viewers, bringing into focus many of issues commonly overlooked by traditional news media and ridiculing these. As such satires help to unmask and demystify the subjects they deal with and by teaching their audience, they also influence how the people will consider these subjects in the future, in this case the British government. Foreign relations and international politics have been traditionally seen as something detached from the common citizen’s life, which is best left to the purview of governments. By exposing the workings behind many of the decisions governments take with respect to foreign affairs and making these workings understandable, the audience is emancipated and more capable of judging its government’s deeds.

Discourse analysis, together with elements of semiotics, allowed approaching the series from both the textual, audible and visual perspectives and made it possible to identify of the underlying discourses present throughout the series in the most accurate way. A total of six discourses were identified, many of which could have been classified under the common heading of power-discourse, but were taken as separate ones in order to better distinguish their particularities. The fundamental epistemological and ontological views present in the separate discourses were then used to identify a theory of International Relations which complies with these. The English School theory was found to correspond with these basic views and the views presented in the series were then explained through this framework, or as the title calls it through these glasses.

The thesis demonstrates how a product of popular media can be used to identify what the audience values and believes at a given time.