Political Participation amongst Migrants. The Case of the Nordic Countries 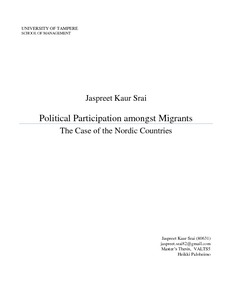 ­­­­­­­­­­­­­­The ongoing process of globalization in combination with the ever increasing migration trends has brought integration issues to the limelight in the modern political world. The successful integration of migrants is one of the key themes that are debated in all migrant receiving countries, where successful integration is seen to be of utmost importance for the development of a society. Political participation amongst migrants is furthermore an important arena, which can be seen as a measure of successful integration. Even though this topic is deemed as an important focus area for future research on integration issues, it has been researched very little. The author aims to fill the research gap by attempting to analyze current trends of political participation amongst migrants in the Nordic countries and to identify some of the reasons that would help explain why some countries are more successful in activating migrant political participation than others. In attempting to address this aim, the author has applied a comparative analysis of the most similar cases and has thereby chosen the following relatively homogeneous countries: Denmark, Finland, Sweden and Norway, to be studied.

The second part of this study consists of data analysis and findings. Chapter 4 reviews migrant voting turn out and representation in local elections, and gives an overview of the current situation of migrant political participation through the analysis of statistical information. This chapter further shows the historical extent of interest migrants have shown to the political elections in the Nordic countries. In this chapter the author finally attempts to identify variations in the political behaviour of migrants in the Nordic countries that are worth examining in light of the research questions posed by this study.

The findings, which were observed in the comparative analysis, were very interesting. Contrary to belief, the analysis actually showed that Nordic migrant political participation had been relatively higher in the earlier times, whereas the trend now displays a rather gradual decline over the years. This trend was shown to be apparent for all the Nordic countries under scrutiny. This drop in the migrant political participation rate, although being a fact for all Nordic countries, has however been seen to vary significantly between the countries being studied.