Politics of Boundaries, Boundaries of Politics: Examining Political Communities with Arendt and Rorty 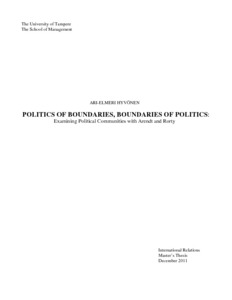 Due to the changes in the nature of world politics, recent years have witnessed a growing interest in questions concerning political communities. The present study contributes to the academic discussion that has sprung from the empirical perplexity about the apparent transition away from a strictly nation-state based order. Being a theoretical contribution, the study approaches the question through two political thinkers, namely, Hannah Arendt (1906–1975) and Richard Rorty (1931–2007). It examines the conceptualizations of ethical and political communities offered by Arendt and Rorty, focusing especially on the themes of democracy, humanitarianism, refugees and the functioning of the nation-state system.

The thesis builds on a methodological approach characterized by a combination of hermeneutics and interpretative eclecticism. It seeks to understand the general outlook of the writers examined by studying the central pieces of work and the reoccurring – politically relevant – themes of both writers and the secondary literature on their thinking. By focusing more on their ethos rather than the actual letter of their philosophical frameworks, it argues not only that both of the examined writers put forth an ethically and politically laudable position, but that we can perceive significant mutual elements between them. The study also engages critically with the prevailing interpretations of their works. Before proceeding to the interpretative and combinatorial parts of the work, however, it is first contextualized in the debates on community, nation-states and the world-order in the contemporary International Relations. Whereas the nation-state once was a natural starting point for research, communities and their boundaries are now seen more as genuine questions calling for a careful examination.

With regard to Rorty, central to his vision is a spatially limited, yet inclusive and democratic ethical-political community that seeks to constantly go beyond its current limitations by opening itself to outsiders. Arendt, on the other hand, provides us with an understanding of community as the locus of political action, a place in the world which makes opinions significant and enables the actor to disclose his or her identity. The study combines their insights into a common vision that presents a critical challenge to the existing IR literature on community in general and the emerging forms of post-national community in particular. The Arendtian-Rortian account presented in this study opens a way to go beyond the major positions in the prevailing literature. More than any of the existing positions, the Arendtian-Rortian vision calls for an experience-based, rather than purely theoretical, way of looking at things. It urges us to start from the existing communities, their practices, institutions, and underlying beliefs. Through a critical scrutiny of these elements, and guided by pluralistic ethical and political principles, it aims at ever deepening and widening democracy. It presents a strong ethical and political plea for communities that foster plurality and inclusion, especially in the sense of making their deliberative processes as inclusive as possible. It therefore has important practical bearings in the current global conjuncture, characterized by increasing global flows and elusive boundaries.