Two birds with one stone? Exploring the role of climate change mitigation in development cooperation: The case of Energy and Environment Partnership with the Mekong Region. 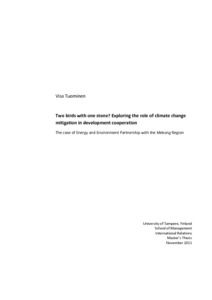 This issue was approached from a constructivist point of view. The research was carried out looking at norm diffusion and how norms influence the program, and the research question was: how does the norm of climate change mitigation diffuse and inform behavior in the EEP Mekong? The empirical focus in this study was on the norm of climate change mitigation, how actors understand it and how it informs behavior within the program. This issue was discussed in the context of development cooperation, and in order to understand the issue better, this paper also analyzed the norms of poverty reduction and ownership in the EEP.

A mission to the Mekong region took place in the beginning of 2011. Eight interviews conducted during the mission form the main data used in this study. In addition, interviews were conducted with the Ministry for Foreign Affairs of Finland and the Nordic Development Fund. Documents of the program were used to complement the material collected with the interviews.