Mental Stress and Strain during Work and Leisure: A pilot study among marathon school participants. 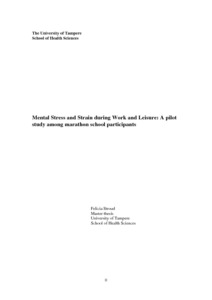 Kansanterveystiede - Public Health
This publication is copyrighted. You may download, display and print it for Your own personal use. Commercial use is prohibited.

The aim of the study is to describe and measure the mental and physical stress and strain during a work day and a leisure day.

A cross-sectional study was conducted on 13 participants of a marathon school aged between 23 to 58 and a total of five men and eight women.  The participants were given a physical fitness test at the beginning of the study.  They were then asked to fill out questionnaires via cell phone asking about their physical and mental strain and capacity.  The heart rate was monitored ambulatory and analyzed with a commercial software programme.