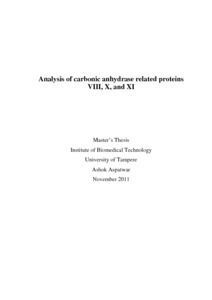 Bioinformatiikka - Bioinformatics
This publication is copyrighted. You may download, display and print it for Your own personal use. Commercial use is prohibited.

Background and Aims: Carbonic anhydrases (CAs) occur abundantly in nature and are found in many organisms which participate in many biologically important processes. Among the -CA gene family, there are three homologues that have no catalytic CA activity due to lack of functionally important histidine residues and are named as carbonic anhydrase related proteins (CARPs). In the present study I analyzed and evaluated the distribution of CARP genes in different taxonomic classes using bioinformatic methods and studied the expression profile of CARPs and their mRNAs using immunohistochemistry and quantitative real-time PCR in different tissues of mice.

Results: I analyzed 84 sequences for the study, of which 21 sequences were novel and previously unannotated. The distribution of CARP VIII and CARP X genes was seemingly universal in the vertebrates and invertebrates whereas, CARP XI was found only in mammals and frog. Many fish species showed independent duplication of CARP X. Immunohistochemistry showed very strong expression of CARP VIII in the cerebellum, cerebrum, and moderate expression in the lung, liver, salivary gland and stomach, and low expression in the colon and kidney, whereas CARP X was expressed in the lung and a weak expression was observed in the kidney and low levels of CARP XI expression was seen in the cerebellum stomach, kidney, cerebrum, liver and small intestine and weak staining was seen in the colon. RT-q PCR analysis confirms the results of immunohistochemical staining, showing wide distribution of Car8 and Car11 mRNAs in different tissues analyzed in the study, whereas the expression of Car10 mRNA was restricted to the frontal cortex, parietal cortex, cerebellum, midbrain and eye.

Conclusions: CARPs are widely distributed with a very high sequence similarity among the organisms analyzed in the study. Molecular analysis of CARPs and Car mRNAs suggests a very important role in the development of cerebellar cortex and motor coordination function in the cerebellum and important physiological role in other tissues. Further studies using knockdown or knockout model organisms are needed to understand the precise role of CARPs.