Sex Work and the Legitimization of Racialized Nation-Building 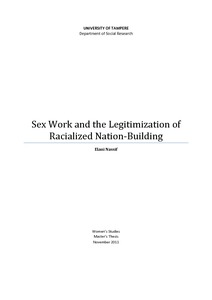 In my study, I attempt to illuminate the connection between the creation of citizen-subjects and recent constructions of the Finnish nation through the designation of racialized, gendered non-citizen others, noting that the constriction of the boundaries of Finnish citizenship coincides with increasing global mobility and tightening immigration control in the West. In the context of the welfare state, this process is particularly articulated through the denial of welfare rights. In order to illustrate this, I focus on migration and sex work in Finland, and how these are entangled with race and nation-building when analyzed through citizenship; citizenship can be understood in terms of the rights we usually tie to formal citizenship, as well as being a multi-faceted concept referring to human rights necessary for agency. Citizenship is also critical for analysis here because if a nation is made up of its citizens, it stands to reason that nation-building is directly connected to who can or cannot be a citizen.

My data set is two-part. First, I analyze tax laws as applied to sex workers, in particular to dancers in erotic bars in order to provide a more concrete example of how taxation regulates/denies access to welfare rights based on nation of origin. Here, I find that the illegitimacy of sex work makes payment of taxes so complicated that it may ultimately result in the denial of welfare, which then operates as denial of citizenship by depriving migrant sex workers of the social rights necessary for agency. Second, I analyze laws aimed at regulating sex work in the context of anti-trafficking and abolitionist discourse in order to demonstrate the ways in which restrictive policies hide behind humanitarian and egalitarian causes, thereby legitimizing the prevention of "illegal migration" and sex work, as well as the surveillance of migrant female sexuality. I find that these discourses not only justify the exercise of stricter migration policy but also that they make working conditions for sex workers (both Finnish and migrant) much more dangerous, in effect depriving them of autonomy and safety. The illegitimacy of sex work is thus useful to the state, facilitating conflations with illegality and international crime that enable the proliferation of state powers along with intimate regulatory interventions in the lives of migrants and ultimately citizens as well.

My conclusion regarding the exclusion and exploitation as propagated by both policy bundles is that not only do they enable the imagining of a certain kind of nation, but they are also directly tied to materially building the (Finnish) nation itself, specifically by determining which bodies can or cannot constitute it. Sex work is thus a site where the Finnish nation is being constructed through the designation of non-citizens, in other words those who are not entitled to free agency, those who are other. This process follows gendered and racialized lines, belying an internal logic that seeks to belong to white privilege through having the power to legislate it. These policies and discourses furthermore intersect to control, marginalize, exploit, and surveil migrants and sex workers with especial damage to migrant sex workers, additionally giving the state the power to manage and surveil its own citizenry. What is immediately necessary on a concrete level is the full legalization and regulation of sex work as a legitimate form of labor, as well as a total re-thinking of citizenship beyond borders and in terms of human rights and freedom.